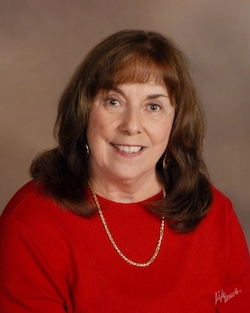 Kathryn Shay is a lifelong writer. At fifteen, she penned her first “romance,” a short story about a female newspaper reporter in New York City and her fight to make a name for herself in a world of male journalists–and with one hardheaded editor, in particular. Looking back, Kathryn says she should have known then that writing was in her future. But as so often happens, fate sent her detouring down another path.

Fully intending to pursue her dream of big city lights and success in the literary world, Kathryn took every creative writing class available at the small private women’s college she attended in upstate New York. Instead, other dreams took precedence. She met and subsequently married a wonderful guy who’d attended a neighboring school, then completed her practice teaching, a requirement for the education degree she never intended to use. But says Kathryn, “I fell in love with teaching the first day I was up in front of a class, and knew I was meant to do that.”

Kathryn went on to build a successful career in the New York state school system, thoroughly enjoying her work with adolescents. But by the early 1990s, she’d again made room in her life for writing. It was then that she submitted her first manuscript to publishers and agents. Despite enduring two years of rejections, she persevered. And on a snowy December afternoon in 1994, Kathryn Shay sold a book to the Harlequin Superromance line. Since that first sale, Kathryn has written dozens of self-published original romance titles, print books with the Berkley Publishing Group and Harlequin Enterprises and mainstream women’s fiction with Bold Strokes Books. Kathryn has become known for her powerful characterizations–readers say they feel they know the people in her books–and her heart-wrenching, emotional writing. (Her favorite comments are that fans cried while reading her books or stayed up late to finish them.)

In testament to her skill, she has won five RT Book Reviews awards, four Golden Quills, four Holt Medallions, the Bookseller’s Best Award, Foreword Magazine’s Book of the Year and several “Starred Reviews.” Her novels have been serialized in COSMOPOLITAN magazine and featured in USA TODAY, THE WALL STREET JOURNAL and PEOPLE magazine. Her books have been on the NEW YORK TIMES, USA TODAY, Amazon, Apple and Barnes and Noble bestseller lists. There are over five million copies of her books in print, along with hundreds of thousands downloaded online.

Even in light of her writing success, that initial love of teaching never wavered for Kathryn. She finished out her teaching career in 2004, retiring from the same school where she began. These days, she lives in upstate New York with her husband and two children. “My life is very full,” she reports, “but very happy. I consider myself fortunate to have been able to pursue and achieve my dreams.”