A Time to Give 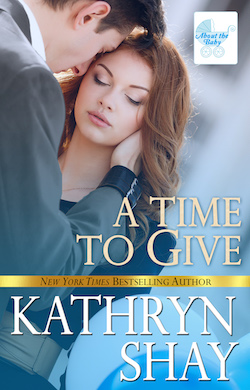 Book 1: About the Baby

What does an unexpected baby bring? A marriage of convenience? A reconciliation? A rejection like no other? NEW YORK TIMES bestselling author Kathryn Shay delivers an emotional series, About the Baby, filled with sizzling romance, heartfelt pregnancy and baby scenes, and a unique look at the healing power of forgiveness.

In A Time to Give, Ben Cassidy has lost everything. A former CEO of a company he built and benefactor of a soup kitchen he started, he was tricked by an unethical vulture capitalist who cheated him out of everything. Ben hit the skids, but now is trying to get his act together. He allows himself to go to the soup kitchen as a guest once a week because it’s the single thing left of his accomplishments.

Emily is a volunteer at the soup kitchen and attracted to Ben from day one. But she suppresses her feelings because he’s a guest. For months, she keeps her distance but one night, when she gives him a ride home, they end up in bed together.

That one encounter changes everything between them until Ben learns two things: she’s the daughter of the man who destroyed him. And she’s also pregnant.

Follow these two people in their struggle to accept each other, their circumstances and the deep attraction they share. Poignant scenes involving all the characters reveal how difficult it is to repair broken promises and unrealized dreams.

If you like stories about secret babies, reunion of lost loves, and wounded heroes, follow the full series, which can be read in any order: A Time to Give, Book 1, Just One Night, Book 2, Be My Babies, Book 3.

*Originally published in 2005, this book has been revised, updated and modernized.