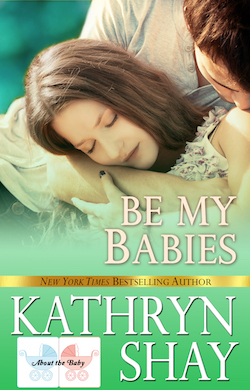 Book 3: About the Baby

What does an unexpected baby bring? A marriage of convenience? A reconciliation? A rejection like no other? NEW YORK TIMES bestselling author Kathryn Shay delivers an emotional series, About the Baby, filled with sizzling romance, heartfelt pregnancy and baby scenes, and a unique look at the healing power of forgiveness.

Fairview, New York is Lily Wakefield’s last stop because there’s nowhere else for her to go. She’s lost everything but the twins she’s expecting. Fleeing from an abusive situation, she goes to this small town hoping to find solace in the grandfather she never knew. Once there, she meets Simon McCarthy, who’s the kind of man she’s always wanted to build a life with. But he doesn’t trust her—with good reason.

Simon has made a life for himself in Fairview and wants to raise his daughter in peace and buy the local newspaper he manages. Then Lily makes her way into both Jenna’s and Simon’s hearts. As do her babies. But she could be the one to threaten his stability and all he’s accomplished. Is Simon ready to take that risk?

When Lily’s past catches up with her, it seems impossible that she and Simon will ever have a chance at happiness.

If you like stories about secret babies, reunion of lost loves, and wounded heroes, follow the full series, which can be read in any order: A Time to Give, Book 1, Just One Night, Book 2, Be My Babies, Book 3.

*Originally published in 2008, this book has been revised, updated and modernized.