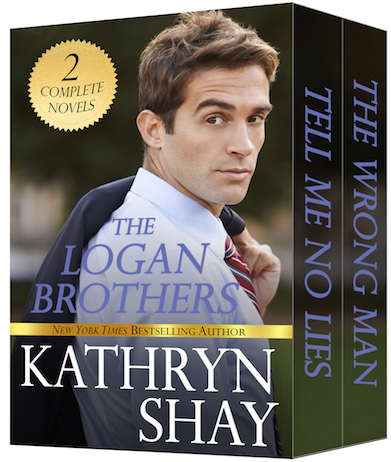 In TELL ME NO LIES, Dan Logan is the Citizen of the Year. Literally. And he worked hard for his stellar reputation after the disgrace his father caused the family. Now a successful district attorney, husband, father and, most importantly, well-respected by his community, he relishes the world he’s created.

Tessa, Dan’s wife, is committed to her family, loving and well-liked. But she hides a secret that threatens their marriage and their perfect existence. When her past comes to light, can she count on Dan to support her?

Reunion should be easy for these two people who believed nothing could tear them apart. But first, they must come to terms with their flaws and inadequacies. The question is: can do this and they stay together?

THE WRONG MAN is the story of Nick Logan, Dan’s younger brother, who left home at sixteen and fell into the seedy side of life on the street. He got his act together, though, went to school and became a psychotherapist at the Crime Victims Resource Center. There, he fell in love with Madelyn Walsh, but he leaves her because he can’t open up and commit.

Maddie was devastated by Nick’s abandonment, but has had three years to recover. Now she heads the Center where they both worked. Not knowing this, Nick returns to counsel troubled kids–teen like he was–and finds Maddie is his boss.

Only their commitment to helping others keeps them working together and in proximity to each other. Maddie won’t trust Nick again and Nick can’t come to terms with his dysfunctional past.

Ironically it is the young victims of alienation, bullying, rape and homicide who reunite the two in a stunning conclusion that will have you on the edge of your seats.

Kathryn Shay presents her usual emotional, heart-wrenching portrayal of contemporary issues, flawed characters, the plight of troubled teenagers and the power of forgiveness and redemption in these two full-length novels.

“TELL ME NO LIES is interesting and has an attention-holding, unique plot that will hook readers.”

“THE WRONG MAN is both sensual and fraught with tension as Maddie and Nick fight their continuing attraction for one another.”