Cop of The Year 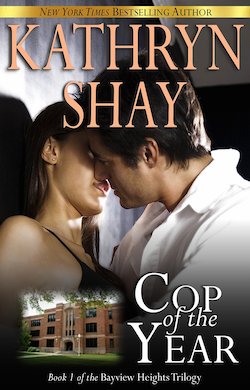 Winner of Best Superromance of the Year, the Golden Leaf Award and the Desert Quill Award as well as numerous 5 star ratings from reviewers.

When by-the-book Captain Mitch Malvaso is forced to work in a high school classroom to improve relationships between At Risk kids and the police department, he’s disconcerted about working with teenagers. But when he meets unorthodox teacher, Cassie Smith, his world goes off kilter. So does Cassie’s. She totally against all he stands for, so why is it she finds herself attracted to him? The further they go into the year, the more they’re drawn to each other. The kids also come to care about Mitch, and because of his past in Vietnam, he tries to distance himself from everybody. He can’t, and he must learn to accept Cassie and her kids into his life permanently. With several highly emotional scenes and deeply moving situations, this story will go straight to your heart.

“Kathryn Shay writes from the heart! Her stories are about real people with real lives. You will laugh and cry with her characters. COP OF THE YEAR is sure to be one of the best books to hit the shelves this year!”

“Prepare yourself for a fabulous emotional ride that will have you reaching for the tissues and leave you with a renewed sense of hope.”

“Kathryn Shay has penned a most unusual novel. The teacher/cop relationship feels natural enough, and the dialogue is a standout. But oddly enough, though I found the romance to be satisfying, it’s the secondary characters of the kids I remember most from the story. The teenage pregnancies, the gang involvement, the drug usage all are a part of today’s high school scene, but Shay makes this a story of hope, not despair. The ending almost brought me to tears. Three cheers!”

“Ms. Shay writes a strong and compelling dissertation on a very real and complicated social issue of our time, weaving in an unforgettable, touching love story.”