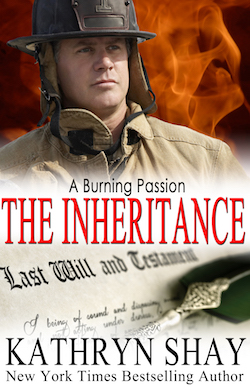 I’m acting as executor of the estate of Mr. Harold Hopewell, whose Last Will and Testament was entered into probate in the Surrogate’s Court, New York County, State of New York.

I write to inform you of certain assets bequeathed to you pursuant to Mr. Hopewell’s Last Will and Testament, to wit:

A sum of two hundred and fifty thousand dollars.

I have enclosed the check in the amount above along with an envelope outlining your stock portfolio.

Please do not hesitate to contact me with any questions.

“I asked you here today to offer each of you the position of captain in the Hidden Cove Fire Department.” Chief Mitch Malvaso made the comment to four of his best firefighters, who sat with him in his office.

“Seriously?” Sydney Sands had risen quickly in the ranks of the fire service, but she was the youngest in the room.

Rachel Wellington cocked her head. “This is out of the blue.”

Leaning back in the chair, Zach Malvaso’s gaze narrowed on his brother. “There’s gotta be a catch.”

“Zach’s right. In order to get the job, you’ll have to transfer to another group.”

“People usually do, when they get that high in the ranks.” Brody O’Malley raised his brows. “How’s this different?”

Mitch nodded. “The mayor has agreed to my petition to open up another fire station. It’ll be Truck 11.”

In the HCFD, vehicles were named for their particular use, and this one would carry ladders, pry tools, a gas-powered saw and big fans for smoke ventilation. “I need four groups to staff the new house. Each of you would be in charge of one.”

Sydney’s eyes were shining. “The position is a lot of responsibility. But it’s also the chance of a lifetime to set up our house as we want it.”

“We open in three months. We’re using a building we closed in the nineties.”

“On Franklin Street?” This from Brody. “I love that place. It’s got character.”

Mitch liked their enthusiasm. “That it does.”

“Who’ll be on our squads?” Rachel always went straight to the point.

“We’ll take applications from the entire department. As usual, we’ll shoot for at least one woman on each group. And ethnic mixes, if we can get them. You’ll have input, of course, and final approval of the people we choose, though I have to say me and my staff already have a few suggestions we hope you’ll listen to.”

Zach rolled his eyes. “Just so long as I don’t have to work with anybody I hate.”

“More likely they’ll hate you, buddy.” Brody, who was friends with Zach, made the jibe. They conducted a running banter when they were together. “Me, now everybody will be cryin’ to get on my group.”

Sydney retorted, “Because you’re so modest.”

“I get humbled by my two little terrors every single day.”

Brody and his wife, Emma, had two children, both rambunctious boys. Mitch knew he was totally dedicated to them.

“Serves you right for having children like yourself.” This from Zach.

Mitch asked, “What about you, Rach?”

“I might be interested. I need some time, though. I love my crew. And I already moved from Seven.” After she and Mitch’s cousin Gabe married, and because he was her officer, she’d volunteered to transfer houses.

“We all love our crews.” Sydney shrugged a shoulder. “But I’d be willing to move on.”

“Take some time to talk to your families about my proposal. I have to know in a week.”

They nodded, then exchanged glances and some smiles.

Mitch surveyed them. This new facility would be good for the department. And he had a feeling all four of them would agree to the transfers. Hell, he would have, had he been offered the chance to set up a firehouse. And, very important, these people would work well together. In some way, Mitch was jealous.

Nah, not really, he thought, glancing at the pictures of Megan and the kids on his desk again. His promotion to fire chief, his loving and still-sexy wife, three children and even two grandbabies were what it took to make him happy.

Fire clawed upward, scratching at the first floor of a burning house on Commerce Street. It traveled to the second story with equal ardor. From Incident Command, where the captain stood with the battalion chief, Zach Malvaso shouted to his new group, “Collins and Coretta, get a ladder to floor two.”

Dan Collins turned to the rig and unhooked the tallest one to reach the upper story. He and Lucy Coretta hefted it and jogged to the building. The April night was cool, but heat slammed Dan in the face as they deposited the ladder on the ground. He nodded to Coretta, and without words, they put on their SCBAs and she began the climb.

Following right behind Lucy, he ascended quickly. When they reached the top, she eased herself in through the window, he did the same, and they dropped into the first room.

“Hell.” The area was filled with dark smoke, its color indicating something noxious was burning. Maybe asbestos, as this was an old structure. Combined with the 3:00 a.m. darkness, the inside was pitch-black. The brutal heat intensified, and sweat dampened his clothes. Lucy hated being hot, and this fire had become an inferno, so she must be suffering. “You okay, Coretta?”

“For someone sizzling in her turnout gear, I am.”

After they searched the one they’d landed in, Lucy said, “Go left.” He’d tease her later about barking orders. She went right.

Dan crawled forward, feeling the wall for guidance. An opening. He turned the corner. Once again, blackness, as if he were lost in a starless sky. He kept going. His metal helmet hit something steel, and the bang was loud even in the roar of the fire and the water slapping on the Red Devil. “Shit!”

“Hit my head. Nothing bad.”

The bed bounced when he pressed his hand on the mattress, signifying an occupant. Leg, torso, head. A woman. “Got one, Cap,” he called into the radio.

“Get her out of there. You and Coretta exit now, too. The fire’s really rolling.”

Kneeling up, he removed his mask and gave the victim air. He started to cough immediately. Man, the smoke was thick and muddy. They’d call for an evacuation of all firefighters soon. Repositioning the SCBA on his face, he stood and grasped the victim under her arms. He took steps backward to drag her to the hall. They hit the doorjamb first because he couldn’t see. Dan swore, then managed to get them into the corridor. The trek was slow to the bedroom and over to the window where they’d entered.

Lucy came in behind him. “Nobody else up here.”

One foot over the windowsill, then the other. He stepped down a few rungs, facing the house.

The vacate horn blasted into the air.

Lucy lifted the woman’s legs onto the windowsill and hiked up her torso. Dan yanked on her from his position on the ladder, carefully so as not to unbalance himself. Lucy pushed from her side. The maneuver was awkward and cumbersome, but there was no time to call for a backboard. As soon as the victim was situated facing Dan, he wedged his knee between her legs, grabbed the rungs under the arms, and when she was secure, he began the slow descent. “Get out now, Coretta,” he yelled up.

One step…four…six…two more to go. Progress was excruciatingly slow. Finally, his foot hit grass. Paramedics, Lisa Beth Duncan from House 3, and a new guy to replace her partner who’d died, took the victim from him. “You two okay?” Duncan asked.

Lucy reached ground and whipped off her face mask and helmet. He grabbed for her hand, they took two steps, then an explosion rent the air and they went flying across the wet spring grass.

They landed hard on the sidewalk.

Lucy Coretta slouched at the oak table in the newly renovated kitchen at Truck 11. Their house had been nicknamed Lucky 11 because the Franklin Street station had been operating for five weeks and every call was deemed a success. Scents of cooking bacon filled the air, but the smell made her stomach roil. A hard whack on the head could do that to a girl.

“Here’s another ice pack.” Dan held out the bag, then dropped down next to her. His brown gaze was sympathetic, as always. “Twenty minutes.” He put his hand on her neck and the gesture felt good. Lucy loved when he touched her. He did it with the ease and familiarity befitting a ten-year friendship.

“This is what happens when you take off your helmet too soon.” Zach could be stern when he needed to. And she’d made a mistake.

At the stove, Will Manchester glanced over his shoulder. He was preparing breakfast for Group 1, their crew, and Group 2 who’d come in for the day shift. The captains had instituted these early morning get-togethers so the entire staff of firefighters in the house could bond. “You aren’t planning to write her up, are you, Zach?”

“We’ve all done the same thing,” Dan grumbled. His mood was unusual because he was normally even-keeled. Except when his wife ditched him almost a year ago. Then, he’d gone off the rails, and Lucy had been the one to pull him back from the edge. Her support had deepened their long-standing relationship. Now, they spent most of their time together.

“No, Zach’s right. The fire was fully involved. I should have waited. I heard the vacate horn.”

“Enough said about this.” Zach smiled at the others around the table. “Let’s eat breakfast. Afterward, our group will debrief about the fire.”

The eggs were fluffy, the toast crisp. Lucy was able to eat some of both. The discussion in the aftermath of success on the fire ground was spirited. They’d gotten good news that the victim they’d rescued was expected to live. No deaths to mourn. Another lucky night.

When they disbanded, Dan stayed close to Lucy. “So where are we going? To my place or yours?”

For the hundredth time, she wished he meant that another way. “You think you have to babysit me? I don’t have a concussion.”

“No arguments. You’re not gonna be alone today. I’ll be there in case you need somebody.”

She would have done the same for him. Insisted on it. “My place, then.”

When she stood, she wobbled. Good thing they were off for the next four days. He slid his arm around her back. She leaned on him heavily as he led her out to his car and settled her in the front seat. They’d taken to driving to work together because she’d bought a house on his street three years after she joined the HCFD. Closing her eyes, she knew she was safe.

In her vulnerable state, though, she wished like hell she wasn’t always so safe around Dan Collins.

« Return to A Burning Passion