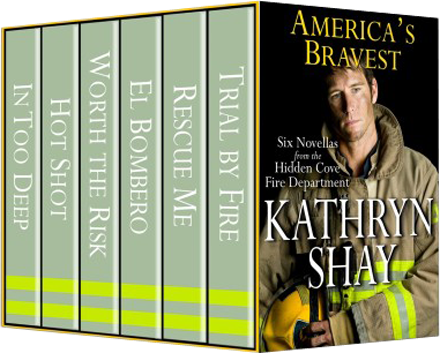 The story of the Hidden Cove Firefighters continues with Gabe Malvaso, cousin of the Malvaso siblings, and his crew of six firefighters whose lives and loves are told in this exciting series of novellas.

The Rescue Squad in the Hidden Cove Fire Department deals with all kinds of emergencies: blazing fires, horrific car accidents and a myriad of medical calls. Like most firefighters, they also have complicated personal relationships due to the nature of their jobs. In AMERICA’S BRAVEST, each of the six novellas details both the love and work of one firefighter with overarching themes of arson, a blogger out to discredit them, and balancing their personal and professional lives. 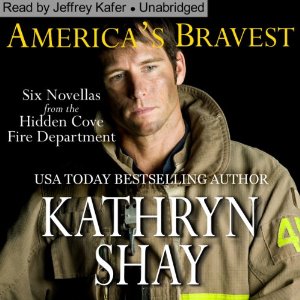 America's Bravest is on audiobook from these online booksellers:

In IN TOO DEEP, Captain Gabe Malvaso struggles with his attraction to Rachel Wellington, a firefighter on his squad. But when they’re trapped in a basement, thinking they’ll die, all bets are off.

HOT SHOT picks up with Paramedic Brody O’Malley, who’s happy with single life until a class reunion where he meets Emma Walsh, the only woman he ever loved. But because he broke her heart, she’s refuses to rekindle old flames. Read an excerpt

WORTH THE RISK follows Ryan O’Malley, Brody’s twin cop brother, as he pursues prickly Lieutenant Felicia White, who’s always disliked his “playboy” persona. But when they are forced to work together on an arson case, sparks fly.

EL BOMBERO is the story of Firefighter Tony Ramirez and his beloved wife Sophia, sweethearts since high school, who run into the biggest challenge of their lives: Sophia can no longer tolerate the danger her husband is in every day.

In RESCUE ME, twenty-four-year-old Sydney Sands saves the life of local businessman Max Delinsky only to fall head over heels in love with him. But trouble comes in merging the discrepancy in their ages and Max’s difficulty with her past.

TRIAL BY FIRE tells the story of Battalion Chief Cal Erikson, who has been fighting for two years with blogger Parker Allen about the fire department. Imagine his surprise when he finds himself attracted to the fiery journalist with deep scars from her past. The arson case is solved, but not before both their lives are endangered.

In THE EPILOGUE, get a closer look at how all six couples live happily ever after!

“Shay’s powerful characters and emotional topics strike a chord with her readers and have earned her a well-deserved place among the top romance authors.”

“Readers will appreciate the powerfully written, tense emergency situations. The Malvaso clan and the other key characters seem genuine in and out of emergency scenarios. Kathryn Shay pays homage to rescue workers with this exhilarating tale.”

“Powerhouse author Shay follows up AFTER THE FIRE with another dramatic and dynamic thriller. Her complex and unforgettable characters breathe life into this truly intense novel.”

“Superb contemporary romance that grabs you in the prologue and won’t let go until you’ve read the final page. Bravo, Ms. Shay!”

“One of the best running collections on the market today.”