Excerpt: Take Me Back 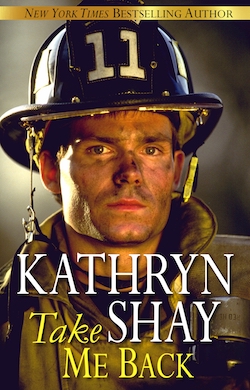 “What the hell are you doing here?”

“Hello, Rafe.” Kate Cassidy’s voice was still husky; she used to turn him on with just its sound.

He couldn’t swallow, as if cotton was stuck in his throat. He gripped the door handle. Finally, he was able to reiterate, “What do you want, Kate?”

She straitened her shoulders. It was longer, now. “I came to explain some things.”

After six years, she wanted to explain some things!

“From where? I don’t even know where you ran to.”

Ludicrously, because she’d almost left him at the altar and he should be cursing her, he asked, “Did you get a job as a firefighter?”

“No. Long story why.” She’d let her hair grow some, and light brown waves fell around her face past down her back. She’d also put on some weight, but there was still that same sadness in her eyes that she always carried with her.

He shrugged away the observation. “Well, whatever you want with me, I don’t want to hear it.”

An ugly laugh escaped him. “You gotta be kidding me?”

As if he’d been burned, he viciously shook her off. “No.”

Stepping back, he closed the door in her face, but stood there staring at it. In a few minutes, the bell rang again. He couldn’t stop himself from opening the door again.

This time, she wasn’t alone. She held a little boy by the hand. It was a punch in gut. He tore his gaze away and the words just blurted out. “He should have been mine.”

Kate held his gaze. “Look at him, Rafe.”

He did. And noticed some things. The boy was probably about five. His hair was a bit curly, dark brown, with dark eyes. The curve of his mouth seemed familiar. And he stuck his hands in his pockets like…oh, my God, like Rafe always did.

Realization slammed into him. “Oh, my God?”

“Just for a bit. Mommy has some private things to talk to about, then you can see him again.”

When the boy trudged out of sight, she raised her chin. “He’s your son.”

“You said when you left if you ever had a baby, you didn’t want two first responders as parents. That you couldn’t bear to have him end up alone like you did and risk him having a childhood like yours.”

“I meant every word.”

Again, he moved await because he didn’t want to grab her in anger. “You left out one little fact back then. That you were already pregnant.”

“You wouldn’t have let me go if you knew.”

“You’re right I wouldn’t.” His voice came out gruff. “I would have insisted we go through with the wedding. I’d have forced us to go to counseling, for as long as it took. Damn you, Kate, I would have protected you!” The last came out loud.

The boy came running over. He must not have gotten into the car. “Mommy, why’s he yelling?”

Immediately, Rafe squatted. “I shouldn’t have. It’s wrong to shout at people. I’m sorry.” He smiled. “What’s your name?”

He held her gaze. “After my father?”

Holding onto his mother’s legs, Tommy asked, “Are you my daddy?”

“Did your mother say I was?”

He took in a breath. “You married someone else?”

“I’ll explain if you let us inside.”

“Come on, Tommy.” He stood and led them inside.

At the exact moment when two little guys rumbled down the stairs which led to the foyer. “We’re ready to go outside.”

“Oh, dear Lord, you already have two boys. Mitch and Megan said you weren’t married. But…” She frowned. “I don’t understand.”

“Let’s go to the back and I’ll explain.” They by-passed a big living room to the right and entered the kitchen. Kate had loved this old Victorian that he’d bought when he was twenty and fixed up the three lives.

She stood behind a chair, frowning, as he addressed the kids. “Tommy, this is Mike and Mattie. I’d like you guys go in the family room to watch that movie you two wanted to see?”

The boys scurried away. Tommy hesitated. Until one turned back. “Come on, Tommy, we got a great movie.” So, he went with them.

It took excruciatingly long to get the boys settled in front of the TV.

“We’ll talk at the table where we can see them.” The kitchen overlooked the family room.

When Rafe served her mug, she’d blanked her face.

“I have only one thing to say to you, Kate. Any future with me is impossible.”

Sweat soaked the shirt of Rafe’s uniform inside his turnout coat as he crawled along the duplex’s first floor. Burning timbers fell on each side of him and his group that followed. “Everybody okay?”

His squad checked in. Brick said, “It’s hotter than hell in here, Cap.”

Firefighters suffered some ill effects of the protective gear. It slowed them down and made movement harder. Which increased heat fatigue.

“There’s the stairs,” Rafe told them after seeing a brief outline of them through the thermal camera. “I’ll take Brick and Lorelei with me.” Which wouldn’t incur as much exertion as climbing. “The rest of you check upstairs. Lieutenant, you’re in charge.”

Laborious minutes later, even for Rafe, they reached their destination, the first-floor bedroom in the back. “There’s not time to quiz you, Lane. Let’s just get to the beds.”

In here, too, black smoke curled around them like fog as they continued their creep, feeling their way along the floor. Rafe, first in line, put his hands on one side of the bed. “A body.”

Brick had gone to the opposite side. “Another one here.”

“Can you get him alone?”

“Does a bear shit in the woods?” His friend sounded offended. Rafe would chide him afterward.

Rafe grunted as he picked up the woman. She was slight and he considered letting Lane carry her out but just then a bad feeling seized him. And he trusted his gut.

“Follow me out, Brick. Lane, you take up the rear.”

Crashing timbers and the sound of water slapping the flames had gotten louder back here. Rafe coughed. Conditions were worsening. They’d just reached the exit from the bedroom, when they heard five repeated short blasts of a horn above the cacophony.

“Everybody hear?” Rafe asked on their internal channel. He forced himself to stay calm.

Bronson, Ruggero and Sullivan checked in with yeses. “We’re on our way down. No one up here.”

“We need to move faster,” he called behind him. The acrid scents of burning wood had kicked up.

He walked as fast as possible with the woman over his shoulder.

“Went down to his knees?”

“No, he collapsed forward.”

Rafe sounded his mayday alarm. A high-pitched screeching rent the air. In seconds, Beth relieved Rafe of the woman, and Murray scooped up the victim who’d gone forward with Brick. Rafe, his heart beating fast, snapped out, “I’ll get Brick under the arms. Ruggero take his legs.”

It seemed to take forever before they got outside. Not only was Brick heavy but they were experiencing fatigue, now, too.

“Get away from the house, quick Rafe,” Baker shouted as they carried their brother to safety.

They were 30 feet away when the duplex exploded.

« Return to Take Me Back