A Price Worth Paying 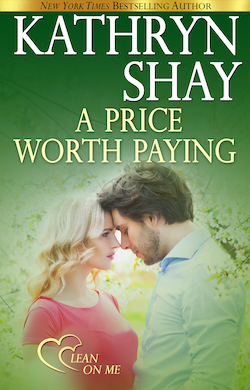 This major original novel is vintage Kathryn Shay. Tackling passion, romance, a sexual predator, infidelity and the enduring love of two characters whose marriage withstands the unthinkable, she proves again why reviewers say she has “earned a well-deserved place among the top romance authors.”

Nick and Callie Muscato have been lovers since high school. They married at eighteen and Callie gave up Vassar to go on the road with Nick as he builds his major league baseball career. Once he becomes a superstar, their perfect life is marred by their inability to have children. And then a miracle happens and they adopt twin boys.

Eventually Nick is forced to give up his baseball career, gets his college degree and when the story opens, both he and Callie are teaching at their Alma Mater. Then tragedy strikes them with two major blows: Callie confesses she’s pregnant with another man’s child and, only an hour later, Nick is accused of sexual misconduct with a female student; he is suspended from teaching until hearings can be held.

Though this stress might split up a lesser couple, Nick and Callie fight the accusation and try to keep their marriage together.

“I started the book well after midnight…almost didn’t sleep… and woke only to continue reading and finished it out in one fell swoop.”

“It was so refreshing to read a book about an imperfect couple who have been married a long time with big problems in their relationship but a determination to save the marriage.”

“Overall a good read. Subject matter was very serious, but done very well. It also had enough of a mystery going on that it keeps the reader engaged.”

“This has been by far one of the best books I have read in a while!”

“This is pure drama with a very good dose of angst thrown in. I wondered how these two could ever come back together again since what has torn them apart has become a runaway train. They both have to admit what their part is in what has happened to their love. Again……I love the teenagers in this book and Kathryn Shay knows how to write her kids (and adults).”

“Kathryn Shay is best at creating edgy plot lines from hot button issues, and creating a world where Romance characters heroically meet tough challenges. She is able to take the best from the Romance genre and complicate the lives of realistic and exceptional characters to create satisfying stories that don’t shy away from the complexities of life – a must read!!!”