When A Man Loves A Woman 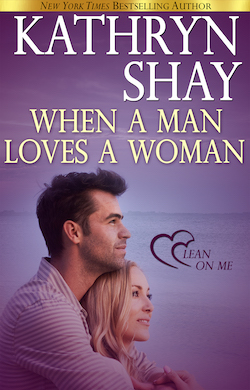 Welcome to Kathryn Shay’s very first novel, which won several awards and garnered hundreds of letters from fans. Nearly one million copies of this book were printed in the 1990’s.

Nick DiMarco is out to prove something to himself and to the world. His ex-wife abandoned him and his two children, sad and shy Heather and wheelchair bound Jason, to lead the life of a socialite. Now, Nick’s in law school and working two jobs to get what he wants. But when Heather’s guidance counselor, Amanda Carson, calls to tell him his daughter is suicidal, Nick must make difficult choices to save his family.

Further complicating these issues are the feelings both Nick and Amanda, a woman too much like his ex, develop for each other. Intense emotional scenes, a frightening look at teenage suicide and a love story that won’t be denied, all combine to make this a powerful, heart-wrenching drama.

“Seldom have I read a more gut wrenching, emotionally riveting book. WHEN A MAN LOVES A WOMAN weaves a tale of hopelessness, desperation, humor and salvation around a cast of exceptional characters. Hats off to Kathryn Shay. This is a keeper.”

“New talent Kathryn Shay bursts onto the scene with WHEN A MAN LOVES A WOMAN, an emotionally gripping story with brilliant characterization and sparkling touches of humor.”

“In WHEN A MAN LOVES A WOMAN, Kathryn Shay has penned a story that will make every parent want to go home and hug their children. Romances readers will love Nick and Amanda and will be on the edge of their seats waiting for them to learn the power of true love.”

“Kathryn Shay delivers a stunning novel that addresses some social issues with a powerful yet compassionate touch. Ms. Shay is an incredibly gifted author who pulls no punches.”