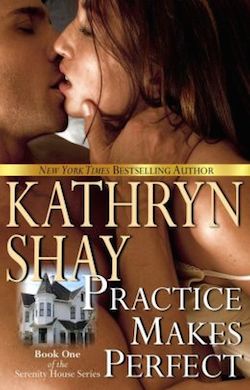 Paige Kendrick was one of the first residents of Serenity House, a home for troubled teens in the Southern Tier of New York. Pregnant, orphaned, and in charge of her younger sister, Paige was terrified about her future.

After giving up her child for adoption, she not only cares for her sister, but becomes a well-respected pediatrician in an upscale practice. Her life is fine until she meets pushy and full-of-himself Ian Chandler, an OB/GYN, who’s starting an inner city clinic.

He wants Paige to work with him, deal with teen moms like the one she used to be, and devote her professional time to his project. But when their relationship turns personal, and Ian wants Paige in his bed, and his future, she balks at the commitment.

Ian won’t stop, though, until he convinces her they were meant to be together.

“Shay’s novel is a sheer joy for readers looking for a contemporary story with honest-to-goodness issues. Paige comes from a troubled place, and has serious trust issues. Ian has had a much more stable life, but he too finds himself in a lonely place – working through the grief that continues to linger one year after the death of his adoptive parents.”