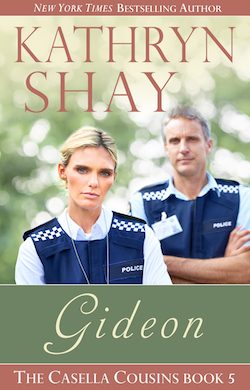 So, crucify him for it. He doesn’t like working with women in the harsh world of police law enforcement.

She sees herself as tough as any man. Then she becomes his boss.

Hidden Cove Police Officer Gideon Casella is a hard man. A divorce three years ago still has him grumpy and out of sorts. But he’s a top cop, which is why he thinks he’ll get the promotion to sergeant that’s being announced soon.

Anabelle Sanders is on her way up the law enforcement ladder right to the commissioner’s office. But she’ll settle for one step at a time, even if she does have to walk all over Gideon Casella’s ego and his barely-concealed chauvinistic attitude. Man, she’s been dealing with men like him all her life.

It comes as a shock to Gideon that the brass gives the position to Sanders, a tough-as-nails female in the department. When he’s assigned to work on a special task force with her—under her—he’s furious at the department, at her, and at life in general.

With these two hardened-by-life cops be able to find a soulmate in each other?