Excerpt: Still The One 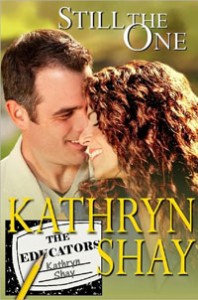 Annie Wilder Jacobs stopped at the steps of the Crystal Corners Inn and drew in a deep breath because she was starting to panic. Should she have come here tonight?  Could she face the people inside who were once her friends then abandoned her when she was at her worst? Why exactly was she here?

Because she’d gotten her life together. Because she was proud of the obstacles she’d overcome. First, she’d weathered the disgrace she’d brought on herself in high school and for almost a year afterward. Later, she’d gotten through David’s death in Iraq and raised her two boys alone. During it all, she’d become an English teacher at the same school where she’d fallen from grace.

For a moment, her mind slipped back to the most painful memories.

No, don’t think about them. You promised yourself you’d only come to this event if you didn’t think about what a fool you made of yourself and how you hit the skids after. Tonight will prove you’re not that girl anymore.

Shaking off her discomfort, Annie climbed the stairs to the refurbished inn and smoothed down her shantung silk peach dress that brought out her auburn hair. She’d let it grow long again after chopping it off in her teens.

In the entryway, people milled around under a banner which read, Crystal Corners Class of ’91 Reunion. The high arches of the historic building rose over several classmates, dressed well, wearing smiles. Hmm, what had happened to them in the last two decades? Though Annie had come back to live in the small upstate New York town situated on Crystal Lake after David died, she associated with no one from her high school. She’d seen them occasionally in a restaurant and on the street and also met up with a few at Open House. Most of her classmates who stayed in town had children in the district. They never had much to say to each other.

“Well, if it isn’t Wild Woman.” The comment came from behind her and she turned to find Larry Smith leaning against a doorjamb, a bottle of beer clasped in his hand. He’d been captain of the football team, prom king, and her boyfriend for two years. Until she’d broken it off. For nothing.

“Hi, Larry.”  She’d promised herself she wouldn’t get defensive or angry if she saw him again, even though he’d been responsible for some of her disgrace.

He grinned like the old Larry. He was a bit heavier but had a full head of dark hair. “Wow! You look like a million bucks. I wish my kid had told me. I would’ve come to parent conferences.”

She’d taught his son in Basic English. Like Larry, he struggled with school work, which was only one of the problems she’d had with the boy. She preferred smart men, like David. And others, she thought with a quick flash of boyish blond hair and haunting blue eyes.

“So, doll,” he said moving close and looping his arm around her shoulders. He smelled like cigarette smoke. “Came to stand up to the old crowd?”

“No, Larry.” Ducking under his arm, she extricated herself from his unwanted overture. “I came to socialize and have fun.”

Without saying more, she headed over to the reception area, a rounded wooden desk flanked by pillars which was part of the original building. Larry followed behind her.

A woman glanced up. Shock suffused her pretty face.

Helena Linstrom frowned. Tall and lithe, Helena had been their prom queen and still had that steel blond hair and wide brown eyes. Not one single wrinkle marred her skin. “You weren’t on the list to attend.”

“I know. I’m not coming to the dinner tomorrow, but the invitation said people could drop in tonight.”

Larry shrugged and said, “I wasn’t on the list, either, babe.”

Helena angled her chin. “You didn’t come to the any of our other reunions.”

Nor had she been asked to help plan them. The committee members all lived in town, but they’d never contacted Annie to work with them. And Helena seemed to dislike her the most, because when her daughter signed up for Annie’s AP English class, Helena had the girl taken out and assigned to another teacher. Rumor had it that Helena didn’t want Annie’s influence on the teen, who’d unfortunately gotten pregnant and had to drop out of school. Annie had read in the paper that Helena had been elected to the school board in May. “I wasn’t able to attend any of the others. But I carved out time for this one.”

Helena scribbled out a nametag. Pointedly, she glanced behind Annie. “No date?”

Annie focused on the woman. “Nope, still a widow.”

Bingo!  Helena paled. “Sorry about your husband. He wasn’t from around here, was he?”

Someone sidled up to them. “Annie, hi.”

Turning, Annie found her high school friend, Jillian, behind her. Jill was the only person who hadn’t abandoned Annie their senior year when she’d gone downhill. The former cheerleader had taken grief for it, too. Her long time boyfriend, who now taught at the high school with Annie, had broken up with Jill because of her friendship with Annie. “Jill! Hello.”

They hugged. Her friend had become an attorney in New York and was successful, if the newspaper was to be believed.

Grateful for the chance to get away from Helena and Larry, Annie headed to the bar with Jill.

“No time for that. We’ll talk later but I got you away from Helena because I have to tell you something.” They slid onto bar stools. “Dylan Kane is here. His hair is darker, but I’m sure it’s him.”

Annie’s heart started to thrum in her chest. Even after all these years. “What? Why would he come to this reunion? He left school our last year.”

“I have no idea, but he’s about twenty feet away at a table. Alone. And staring right at you.”

Annie swallowed hard. She’d been wrong. If Dylan Kane was here, attending the reunion wasn’t a good idea at all.

Dylan watched Annie Wilder from across the room with a neutral expression. At least he hoped his face was neutral. His heart was doing cartwheels in his chest and he was sweating under his taupe sports coat. After twenty years, his reaction to her hadn’t dulled.

Taller than he remembered, she wore all that luscious hair in soft waves down her back. He remembered how her hazel eyes had once looked up at him with adoration, innocence and total acceptance. Guilt, dark and ugly, spun a web around him and he tried to tear his gaze away from her, but he couldn’t.

Thankfully, her back was to him and she was talking to the person with her—was that her friend Jill? Annie touched the woman’s arm, slid off the stool, turned and calmly walked toward him. He braced himself for harsh words, accusations and insults that he totally deserved.

When she reached him, her scent filled his head. It wasn’t sexy, but wholesome and flowery. Her skin was flawless, her cheeks highlighted with dusky pink, no eye makeup but she didn’t need any. She locked her gaze with his and said, “Hello, Mr. Kane.”

Well, that told him how this would go. True, he’d been her teacher for three and a half years but she had reason to use his first name.

“No thanks.” She clutched her purse tightly to her chest like a shield on the battlefield. “What are you doing here?”

“But you left midway through the year. Why would you come to town to attend our reunion?”

He drew in a breath. “Actually, I didn’t. I came for a job interview.”

Her face drained of color.

He tried to ignore it, but like in the past, her emotion wended its way inside him. As a young girl, she’d had a dysfunctional family and confided in him about her mother. “What about you? Where did you end up?” He knew she left town to go to college a year after she graduated but then he stopped checking on her.

He stiffened. “No, you aren’t. I’ve seen the roster of teachers. To check out anybody I might still know.”

“My last name is Jacobs now.”

So she was married. Huh!

“Because I’m interviewing to be the principal of the high school.”

Now she went ashen. “You can’t do that. I couldn’t possibly work for you.”

What the hell was she talking about? She couldn’t work for him? It was true that he hurt her when he left town. But she’d gone on with her life, while the girl she used to be obliterated every bit of self-confidence he had as a young man. He lost a job he loved and left a community he cared about because of her!

« Return to Still the One

“Kathryn Shay never shies away from tough or controversial subject matter. I thought all the issues in this book were handled with care, and ably so. She made both characters immensely appealing, so I was really rooting for them to make it work. It was as difficult for the reader to find a way out of their predicament as it was for Annie and Dylan. But Shay comes up with the perfect (and only, IMO) solution available to them.”

“I am a former high school teacher myself and the premise of this book sounded interesting. It was a quick but engaging read that I really enjoyed. The characters were well developed and very likable. I will definitely be finishing The Educators series by this author.”

“As always Kathryn Shay tackles what most see as unthinkable material for a romance novel and ends up with a winner of a book. Her characters are just so human! Another one I couldn’t put down. I feel guilty paying so little for such a good read.”