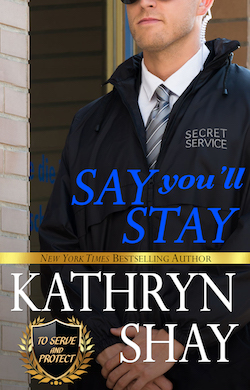 Book 2: To Serve and Protect

Gabe Marino has been a disgraced Secret Service agent since his advance team in South America fouled up. After he helps the president solve a case involving his sister, Gabe is on the verge of getting exactly what he wants: a spot on the coveted Presidential Protection Detail.  He’s known Macy Stevens and her son for years, helping her out after her agent husband was killed and befriending the troubled child.

Just as Gabe is preparing to go to the White House, sparks fly between him and Macy. But he can’t give up his dream of restoring his reputation in the service and she can’t marry another agent who wants to spend his life in the kill zone. Exactly who is going to give up what to pursue this doomed romance?

SAY YOU’LL STAY gives readers an in-depth look at training Secret Service recruits, a peek into the life of a boy with emotional disorders and the man who befriends him, and a tender love story that you won’t want to end. The book will have you pulling out the Kleenex.

“What can I say about the talented Kathryn Shay? She writes a well-paced, terrifically plotted novel filled with real feelings and believable dialogue. Highly recommended.”

“With brilliant characterization and sizzling sensuality, fast rising star Kathryn Shay gifts us with an emotional powerhouse of a love story.”

To Serve and Protect